Skip to main content
Get the Course Free Preview

Step-by-step guidance by a 7 figure Amazon seller. 3,500+ students have already followed it to launch their first products on Amazon. 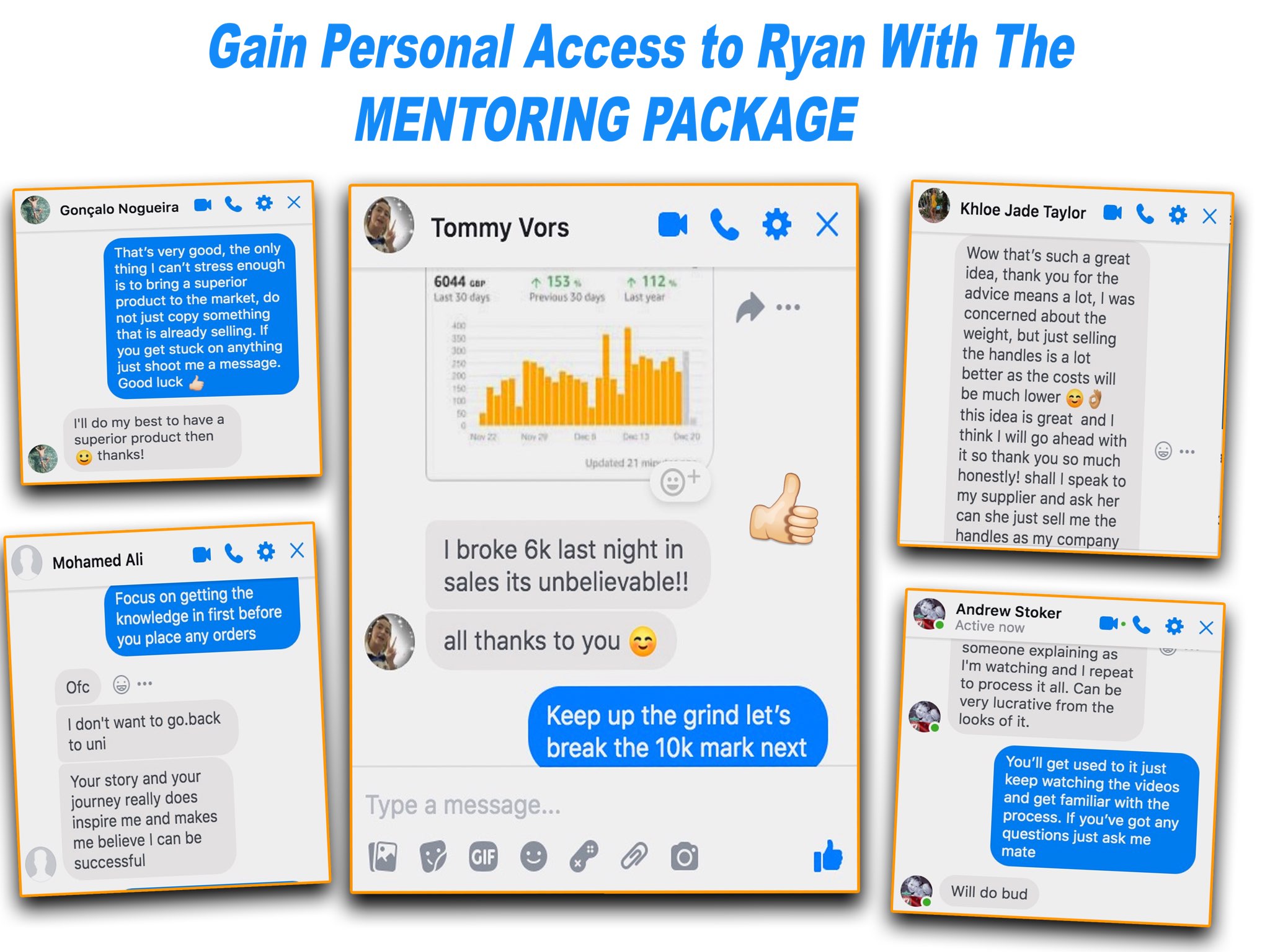 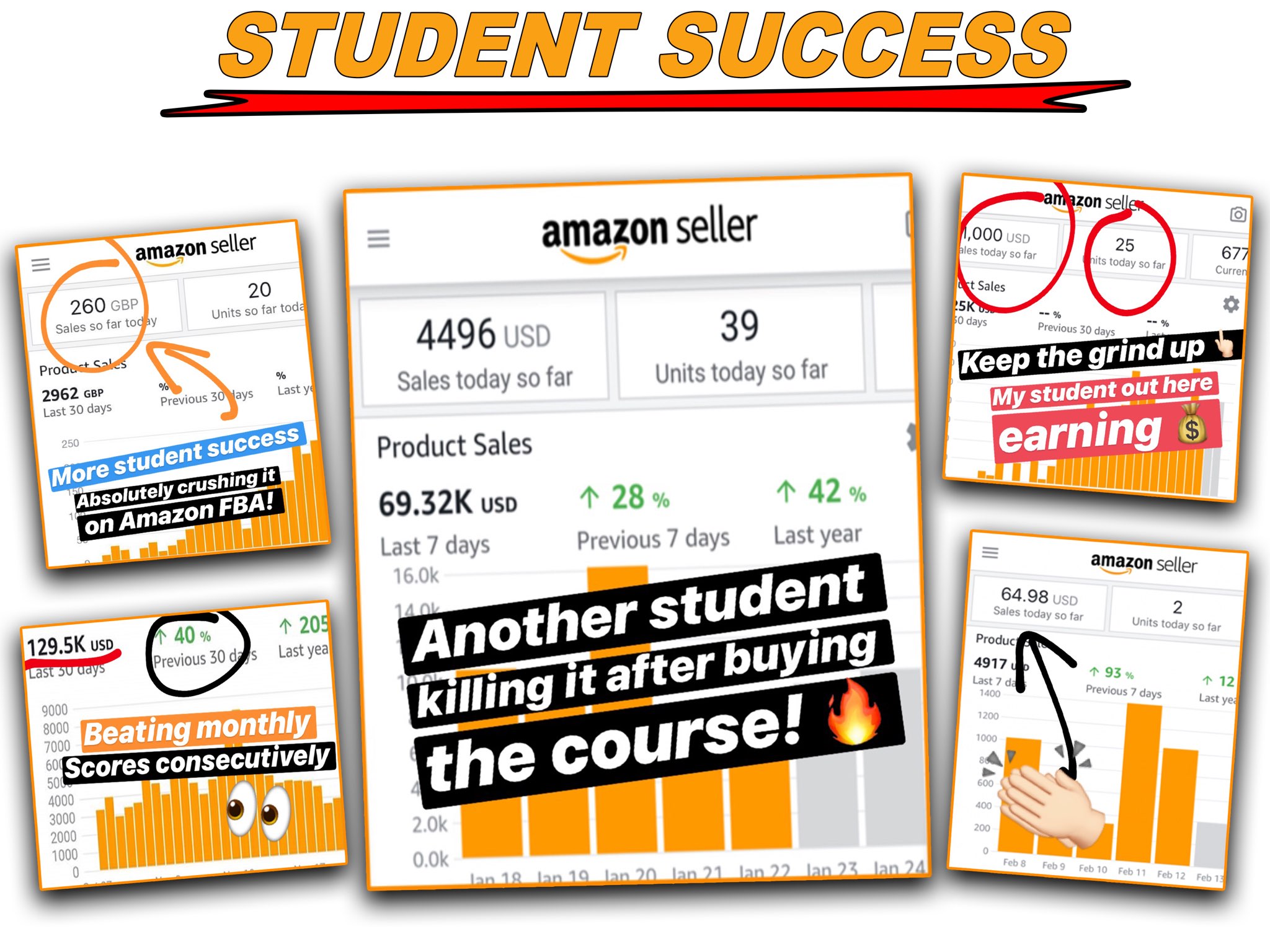 What does freedom mean to you?

For Bruce, freedom is about being able to spend time with his 2 year old son and watch him grow up.

“I’m not interested in being filthy rich, but I would love to provide a better life for my son without having to spend half of my day away from him”

And for people like Robin, it’s about helping her husband escape his unfulfilling job, become their own boss and grow their own business.

“My husband is in a miserable job. [I want to sell on Amazon] so he can get out of there!”

The question is, how do you get it?

The graph that explains why people choose Amazon FBA

Did you know that of the people that launch products on Amazon...

While most people are spoon-fed by the media about businesses failing due to an unstable economy and new regulations, Amazon FBA sellers are making a killing with winning products. 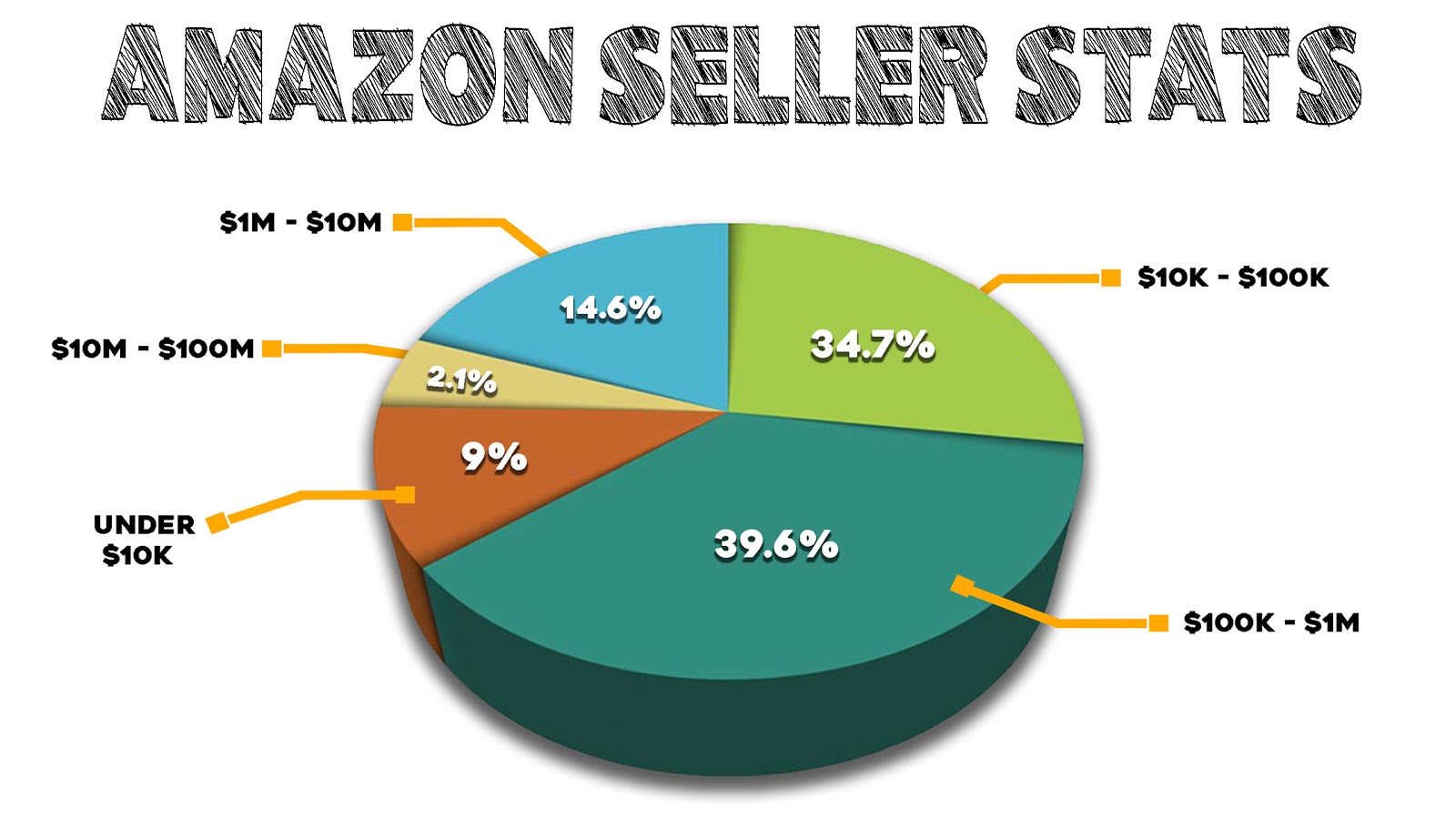 Yet you might wonder, if Amazon FBA is such a great way to build an online business in times of uncertainty, why don’t more people find and sell their first product?

What’s holding you back from selling on Amazon?

What we found out is that most people suffer from at least one of these barriers.

Listen carefully, do any of these sounds like you?

Information Paralysis - “I don’t know what to do”

Lots of people start researching, or even find a winning product idea.

But then they realize it’s only the first step.

And that they also need to learn how to:

This is when they enter “information paralysis”.

Faced with needing to learn so many things, they become overwhelmed and end up never launching at all.  Here’s a typical thought process:

“What should I do next?”

“This seems so daunting, where do I even start?”

“Maybe I’ll just do it tomorrow”

Lack of Confidence - “Am I doing this right?”

Next up are the people that really want to sell on Amazon but find themselves questioning everything they’re doing, especially in times of new reality where policies change and you have to adapt quickly.

With no-one to look over their shoulder and guide them through the process, the doubts start to sink in.

They check the data a hundred times but still wonder if their product idea is actually any good and their investments will be justified.

They try to contact suppliers but are worried the suppliers will just take their money and disappear.

They never even start an Amazon ads campaign because they’re scared that they’ll end up wasting all their money. Fear of being broke with no penny to support the family is a real burden.

Without anyone to give them guidance, they struggle to make decisions out of fear of failure. And while launching products should be FUN, for them it means months of sleepless nights.

Overconfidence - “It can’t be that hard, I’ll do it myself”

Then there is the last group of people. They have the desire to succeed, yet end up making all kinds of expensive errors during the process and left with an empty pocket.

Why? Because they go it alone and only count on Google when they get stuck.

If you ask Google how to boost your ranking on Amazon… you’ll be told to use discount coupons.

Yet Amazon stopped this tactic from working. Now all that happens is you’ll waste money on some useless tools and see no ranking difference at all.

Or if you ask Google how to get 5* reviews for your product, you’ll end up being told to use review clubs by Amazon’s own forum. 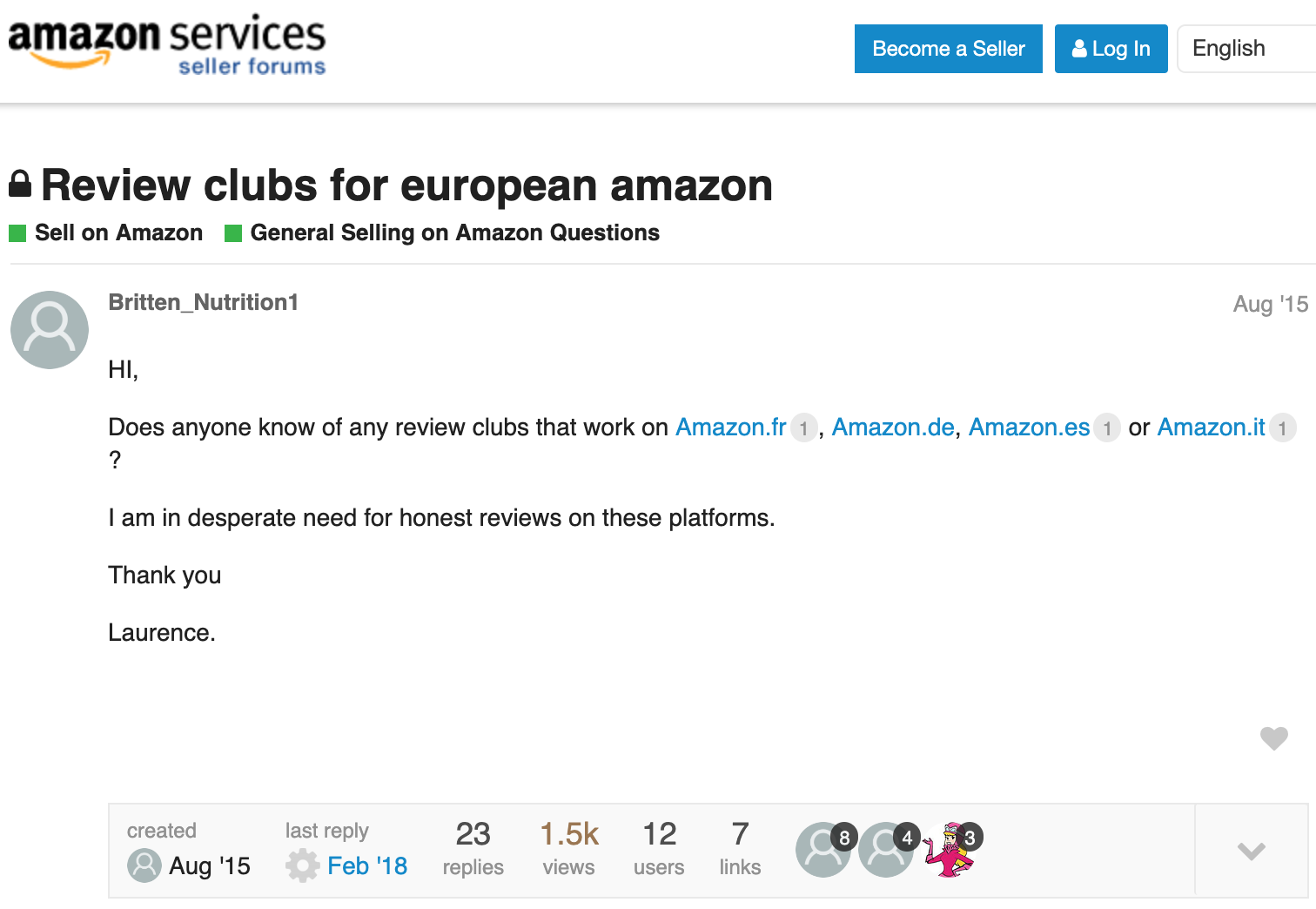 Yet at the end of 2016, Amazon banned this. Now if you use a review club, you could be stopped from receiving reviews, or worse — banned from Amazon entirely.

There are hundreds of examples just like this, some that might cause minor consequences, and some that can cause your entire shipment of products to be seized!

You can call it a trials-and-errors method but not in times of new economy regulations and puzzling uncertainty.

The point is, without an expert to point these things out, and with the need to learn so many things, it’s super easy to fall for them.

So here’s the conclusion we came to.

Imagine trying to swim for the first time. You wouldn’t start by jumping into a lake on your own. It would be crazy – you’d end up drowning. Yet this is what some people try to do on Amazon.

Everyone who takes their first steps on Amazon has just two options.

Option 1: You get through it alone and try to learn everything by yourself

From our experience, most people that choose this option:

But there’s a better option…

What if you could be guided by a proven 7 figure seller who has already launched multiple successful products, helped 3,500+ people do the same, and put together 50+ videos showing you everything you need to do every step of the way?

He knows all mistakes you should avoid and can guide you all the way from having no product idea to find a winning product, source it, create listing, launch, advertise, promote... and beyond.

Well, now you can. 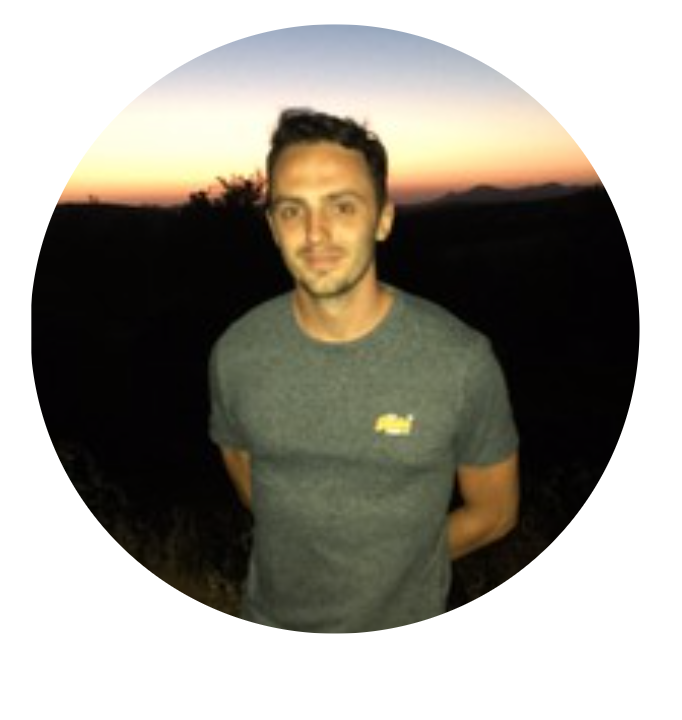 About your instructor: Ryan

Over 9 chapters, you’ll learn the entire process to selling on Amazon with 50+ videos and 10 PDF’s.

Plus new EXCLUSIVE videos of how to use AmazeOwl to find your winning product idea.

The Master Amazon FBA course with Ryan is an absolute must for anybody who is serious about selling on Amazon. Ryan's fast moving style demands concentration and one needs to take regular breaks in order to stay on track. There is so much valuabl...

The Master Amazon FBA course with Ryan is an absolute must for anybody who is serious about selling on Amazon. Ryan's fast moving style demands concentration and one needs to take regular breaks in order to stay on track. There is so much valuable information to learn. I aim to have the course notes displayed on a second monitor as I go through the setup and get familiar with all aspects of the mastering Amazon selling. It's an invaluable resource that I can refer to again and again. The same goes for Oleg's incredible course. He shows the intricate detail required from the initial research, through all aspects of the process to successfully market a product made in China.

very informative on what to do step by step.

very informative on what to do step by step.

We’re so confident that Master Amazon FBA with Ryan can help you find, source and launch your first product on Amazon that we’re willing to take all the risk.

If you buy the course, but aren’t satisfied and watched less than 15% of all the videos, simply send us a message within 10 days of purchase and we’ll give you a full refund no questions asked. We’ll even eat the credit card processing fees too.

What would you do if you could set your own working hours, work anywhere you want, and make your own business decisions?

Would you spend more time with your family? Would you go swimming during the day and work in the evening? Would you travel the world?

Would you choose to launch lots of products or just a few?

Just remember, every Amazon seller faces the same choice. Go it alone, or get guided by a successful seller.

It's up to you which way to go to launch on Amazon. Still, ask yourself where could you be in one year just with a bit of help and support?

Join 3,500+ students that have already taken Master Amazon FBA with Ryan, launched their first products and got the freedom they deserve.